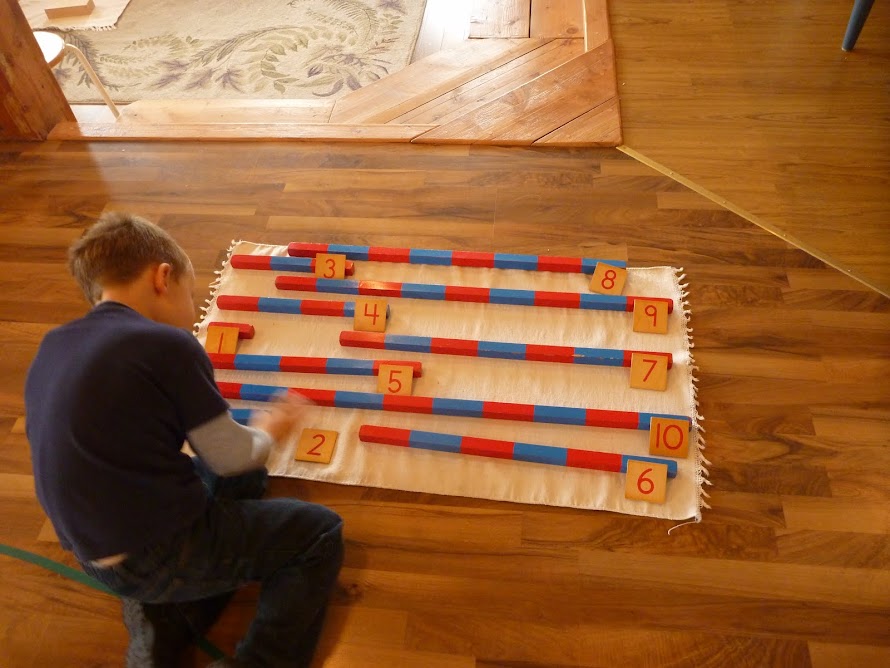 Now that the flurry of a new school year is under our belts, I am once again able to indulge in one my favourite tasks .....observing the classrooms.  Today I am up in our Parksville school and have just spent a delightful 15 minutes watching a little boy (almost 3) happily replacing all of the cylinders into all four cylinder blocks.

For those of you who may not be familiar with this material, the cylinder blocks are four solid blocks of wood with different sized cylinders neatly fit into 10 holes that have been drilled into the block. Having never had to try and describe these before, I think a picture will give you a better idea. 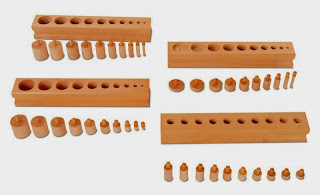 The presentation starts with the child being shown how to carefully and gently remove all of the cylinders from one block and then replacing them.  The teacher models to the child how to look into each hole before replacing the cylinder in order to get a more accurate idea of where each goes. 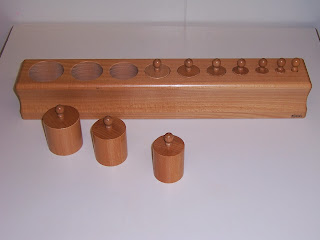 When the child has mastered one cylinder block, he is invited to work with two blocks at once. 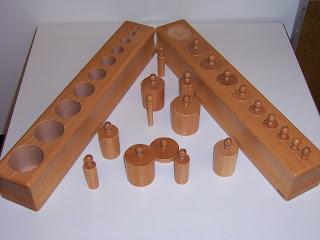 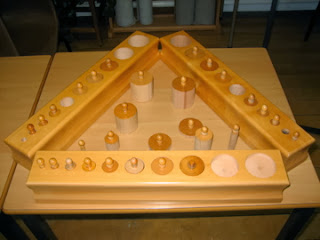 and, after much practise, four. 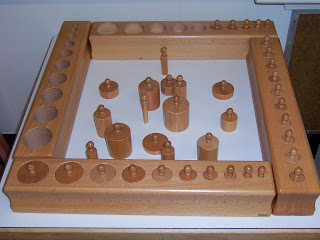 Now, I have watched adults enjoy the challenge of replacing all the cylinders and can well imagine the sense of accomplishment a child feels - after months of patient focus and practise - when he replaces that final cylinder in the fourth block.  Sheer pride and delight. That is what I was waiting for while watching the 'almost 3'- that moment when the internal satisfaction bubbles up to the surface and erupts into a big grin.

He had set up his work on one end of a table big enough for two and there was an older boy working at the other end. With the height of the blocks added to the height of the table, the younger child was just tall enough to peer into each hole to replace a cylinder.  His face was a study in concentration as he carefully replaced the cylinders in their proper holes.  Picking up one of the largest (tall and wide) he correctly decided that it must fit into the hole farthest away - just out of his reach.

The younger child stopped in his tracks, eyes locked on the cylinder, then he slowly levelled a look at the older child.  He glared for a full 5 seconds after which he deliberately pulled the cylinder back out of the hole, leaned it precariously and walked around to the far side of the table.  Another glare at his table mate then back around he walked to lift his hand and push the cylinder into place.  That done,  he took a step back, stared at the older child for another 5 seconds, then calmly went back to finish his work.  Not a word had been exchanged.

Eventually, the last cylinder was replaced and there it was.  That look of accomplishment and delight.  It lit up his face as he looked at his completed work.  He did not look to anyone else for approval.  He did not peer around the classroom to see if the teacher was watching and he obviously didn't feel the need to tell her.  He had done the work for himself, all by himself and he didn't need any external validation.

I am so glad that I was on hand to witness it and am still giggling about the nonverbal exchange between the children.