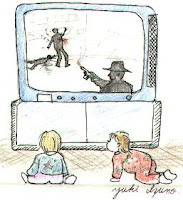 Sitting in a restaurant the other day, I overheard a very interesting conversation. Okay, I’ll admit it – I eavesdropped - but I couldn’t help it because the topic was one that comes up often.

The conversation took place between two young mothers about TV and what they thought was appropriate for their young children. One of the mothers felt that TV should be very carefully regulated and vetted – in other words, her child would never be left in front of the TV unless watching a video that she had already seen and decided was appropriate. Violence was forbidden in any form. The other mother thought she was being too strict and thought some violent movies were Okay as long as the parents had a discussion with the children about the violence.

I’ve heard the latter argument many times . Some people have tried to tell me that there is death and violence in the real world and children can be prepared for it by watching gentle yet violent films like the Disney films. Oh, really? I remember how devastated I was when Bambi’s mother was killed. For days I worried about my own mother, hovering and clinging until she sat me down and got to the bottom of the behaviour. I didn’t watch TV for a very long time after that and the fact that I can still remember how I felt 50 years later is the strongest proof I have that even a little violent TV is not Okay.

Oh, how I wanted to barge into the mothers’ conversation with my own opinion. How much I wanted to tell the second mother that violence seen on TV is re-enacted in the classroom and how other children will react negatively to her child’s behaviour. I also wanted to tell both women that if it is a choice between yelling at a child and using the TV as a sitter long enough to calm down, then by all means, turn on that machine. Just be mindful of what your child is watching and don’t leave them there for long.

My experience working with children has taught me that they react to violent programs or movies in three ways:

Yes, I wanted to tell the young mothers, TV in moderation is fine as long as the child is watching a non-violent film with supportive adults. There are many good movies and programs available and, though finding them may take a bit of searching, you’ll find it well worth your time. After all, raising our children is our most important job.
Posted by Cynthia Dyer at 2:30 PM

I was actually able to get involved in two such discussions over the holidays (actually, they revolved around the question of whether Disney movies were OK or not, but not specifically because they contained violence). One dad's response: "But, it's what my 2- and 5-yr old girls want to watch!" Great, if they wanted to watch porn, would you let them?? The other one (not even a mom herself): "I think kids should be exposed to everything, it's a tough world out there." Well then, why not just sit them down in front of a Law & Order episode? It's just as violent, and at least it's less insulting to a child's intelligence!

The most interesting thing I've found, though, is recent research that suggests that while it's true that children who watch violent TV are more physically violent, children who watch so-called "educational TV shows" are more socially and psychologically violent than their violence-viewing peers! This is because the so-called "educational" shows feature situations in which someone is being mistreated, and then try to teach a lesson by showing how to resolve the issue without fighting. But guess what? They spend 20 minutes on the mistreatment part, and less than 5 on the solution part. Guess which one the kids learn more about? :)

How about NO TV? Throw it out of the house, like we did. I also have two students who don't watch TV, and they are the two most focused and interested young children in the classroom.

Thank you so much for adding to this discussion. I found the part about "educational" shows very interesting.