Ever had one of those days? Thursday of this last week was a doozie! At first, I wasn't sure I wanted to write about it. Will readers understand that even with the best intentions, things can go in directions never considered? Then I read about another teacher's Thursday over at montessorimatters and decided there MUST have been something in the air that day.


Thursday started like any other day. I woke up at 5, fed the cats, made the coffee, ate my breakfast, made my lunch, had a shower, dried my hair and woke the rest of the family. I was just deciding whether or not to iron a particular shirt when the phone rang.


It was the teacher from the other primary (preschool) classroom.. She was ill and wouldn't be in which meant that in order to fulfill the provincial licensing requirements, we would have to reshuffle the staff and the children – never a particularily good solution but Montessori substitutes are few and far between. Our assistant went to help in the other classroom, a few of my children went into the elementary classroom and I stayed (alone) in my classroom with 15 children.

Everything went just as any established Montessori room should. That is, everything went well until around 10:30. Just as a child arrived late from a doctor's appointment, false fatigue set in. Now I know that during false fatigue, I am not to interfere – to trust the method and the children will settle. However, I am also pretty clear on what kinds of behaviour should be stopped (interfered with).

The late child could not settle down and was disturbing everyone he came in contact with so I took him, gently, by the hand and asked him to stay with me for a minute or two. That's when one little girl (we'll call her Alice), just back from a two week trip away, decided to pick up the pom poms that another child (Betty) had scattered as part of the sweeping activity. Alice was popping the pom poms into her mouth then spitting them into the garbage. Betty asked Alice several times to stop and finally asked me to help. Over I went to redirect Alice.

While helping Alice pick pom poms out of the garbage, one of our 5 year old boys discovered that the construction of our button frame lends itself beautifully to being put over one's arm and used as a sheild. Immediately, another 5 year old picked up a pencil and brandished it like a sword. By the time I got to them (because I try NOT to run across the classroom) the "battle" was full on and there were several pencil marks on the back of the dressing frame.

Once the boys were settled with an eraser and working to get the pencil marks off the button frame, I turned to look for Alice. She had retreived all the pom poms out of the garbage and had returned to her sewing work. I quietly moved closer to observe her. That's when I noticed a strange substance all over the floor around her table. It didn't take me long to realize that she'd been practicing her cutting skills on the pin cushion and had discovered all the lovely sawdust inside. A sweeping lesson ensued.

While the sawdust was being cleaned up, one of our youngest children moved too quickly at the snack table and bumped three plates onto the floor with a resounding crash! Again, I calmly walked over to the broken dishes with a dustpan and whisk broom – completely aware that several pairs of eyes were following my every move – and carefully swept up the shards of glass.

Thankfully, by then, it was time to call the children together to get ready to go into the playground. That's when the Principal came into the room and reminded me that I was teaching Art in the elementary class that afternoon. 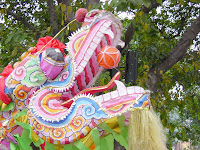 Great! I'd forgotten and had nothing prepared. Since we are making a life sized Dragon head for the Spring Presentation (more on that another time) I spent my lunch break running around cutting chicken wire, mixing flour and water, and cutting up newsprint.

The afternoon went very well so we decided to clean up the Elementary classroom and go outside for the rest of the afternoon. That's when it happened. As the elementary children were putting the chairs up on the tables, one chair got knocked off, somehow swinging around to smash into the side of the turtle tank. Several litres of water (felt like thousands) , sand and turtle came flooding out across the floor and the children scattered.


Now here is the good part. The oldest children (three girls of 10 & 11) immediately flew into action. One of them picked up the turtle, another found a bucket, while the third herded all the younger children out into the hall. Once the turtle was safe, two of the girls found mops and buckets and began to soak up the water. The third girl got on the telephone and called her mother to bring in an empty fish tank they had at home.

By now it was home time but the room was still awash. No problem! The older girls picked up the younger children one by one and carried them across the room to get their coats and backpacks. Then they carried them back again to get their outside shoes on. Honestly, I could have made myself a cup of tea and put my feet up!

To make a long story a little shorter, the new tank arrived, many parents and another teacher stayed around to help and by 3:30, everything was sorted and back to normal.

I wonder what next week holds in store?
Posted by Cynthia Dyer at 12:09 PM

Wow, Cynthia! That was quite a day! I wish I could've been there to help! Although I know there are rules against it, I'll bet you wanted to hug the girls who helped so nicely! Oh, why, though, does everything happen in one day!

Oh my goodness, while reading this I didn't know whether to cry, laugh, cheer, or hide under the couch! Kudos to you for not running across the classroom, and for sticking to natural consequences. And... wow... Those girls reaffirm my belief in the magic of Montessori. You made it through, and soon you'll look back at this post with a chuckle. :)

Thanks for your words.

I'm glad to say that John, the turtle, is now in a brand new (proper sized) tank. The elementary children will be fundraising to pay for it and are already planning a bake sale.

And yes, the oldest girls proved that there is nothing like a Montessori education for children.

Hi Cynthia. Thank you for visiting my blog. Diana mentioned your blog at the parents meeting on Wednesday. I'm glad I was able to find it and have enjoyed reading your posts.
I noticed you mentioned an evening Parenting class in your previous post and was wondering if that was open to all parents?
Glad to be able to connect with you.
Jennifer