Reflections on the Tooth Fairy, the Easter Bunny and that Big Guy in the Red Suit…….


Before I began my Montessori training and the boys were very small, I perpetuated the Santa Claus myth with a vengeance.  On Christmas morning there was a big, muddy footprint on the floor in front of the fireplace and on the mantle was a letter from the jolly old elf himself.  The cookies and carrots so carefully left out on Christmas Eve had disappeared and there were two new Elf-made  presents under the tree addressed to each boy in shaky North Pole hand writing.  Needless to say, the boys were staunch believers. 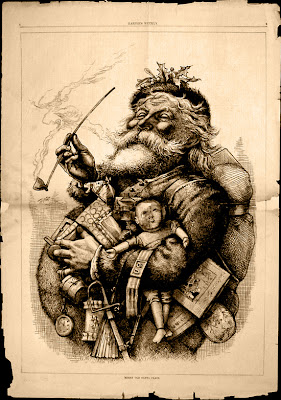 The lies always bothered me – a little.  How could I justify telling such fibs to my children when my husband and I expected them to be honest and truthful.   In our own  feeble defence, Santa was never used as a threat and the boys never received coal in their stockings.  However,  somewhere in my not-so-subconscious I knew that our investment in the myth was larger than the boys.

Then the lecture about Dr. Montessori's views on fantasy and imagination came along in my training, and I had to swallow a big lump of sooty guilt.  I knew we'd probably made a mistake and that, at some point, the lie would come back to thump me on the head. I was right.

A few years along, my younger son lost a tooth and the "Tooth Fairy" forgot to place a coin under his pillow.  Luckily, the boy didn't check under his pillow immediately and the Tooth Fairy thought she had enough time to slip the coin under it while he was in the washroom.  This act of parental deception was witnessed, unfortunately,  by his older brother.

A few minutes after returning to my bedroom, the older boy walked in with a thoughtful expression on his face.

I looked at the almost-9-year old boy and said, "Of course I am!  I thought you knew that."

I’m writing this with the hope that other parents might learn from my mistake.  Santa Claus is a big part of this country’s culture whether one adheres to the religious aspects of Christmas or not.   It is especially important that at this time of year we remember our children look to us to help them sort out the world around them.

As Montessori families most of us strive to offer the “real” world to our children.  We buy them real, child-sized tools, trust them to help with the household chores, and set up our homes to include the children in every room.  It behooves us to think very carefully about how we present our cultural myths to our children because at some point, we will be asked if there really is a Santa Claus.

I don’t have a definitive answer.  When talking to friends and colleagues, I found there are many different ways of handling the Santa Claus question.  Some people tell their children that they don’t know “but it is fun to pretend.”  Others tell their children that ”some people believe in Santa” and let their children fill in the blanks.  Still other parents turn the question around and ask “What do you think?’ as a way of opening up a discussion giving the child the opportunity to work out their own answer.

Whatever you decide to say when the time comes (and it will) it is good to be prepared.  The Christmas Holidays are busy enough times without being blindsided by the Santa question.
Posted by Cynthia Dyer at 6:33 PM

I wrote about this topic, too, from the other side - we do Santa and we focus on the charitable actions of the real St Nicholas. It actually went live today over here: http://naturalparentsnetwork.com/santa-claus-is-coming/

We have read or told the children about the myths behind Father Christmas which in the uk go right back to pre-Christian stories. We always told them that they are stories and when they were little they helped us make their siblings stockings so we were all Father Christmas together. We have also looked in more depth at the myths as the children have got older. They have all had a moment of regret that they have never believed but they also appreciate that we have never lied. We have done similar with the tooth fairy and Easter bunny. We have just had to be careful to make sure they haven't told the truth to children whose parents are working very hard to make them believe. Personally, there is no magic in lying and a lot in understanding and enjoying the traditions.

Elff on the shelf is a whole other ball game though and parents who introduce that should think very hard about what they are teaching their children about self control and intrinsic motivation.

Thank you for sharing your personal experience with belief in Santa Claus. . . and some great perspective on how Dr. Montessori thought about fantasy and wonder.

Our children are young now, and my 4 year old believes in Santa. I follow her lead and give her the fantasy that she is enjoying. We talk about Santa, we write a letter to him, we make cookies for him and leave carrots for the reindeer. I see it as playing along playing pretend with her - just as in any other pretend game or role playing activity that she comes up with!

I wrote about how I try to de-emphasize the commercialism and selfish gimme gimme gimme surrounding a consumerist Christmas, as well as how we try to avoid perpetuating the "You'd better be good so you get presents from Santa!" angle.

We Believe in Santa

To us, to me, to our family, Santa is a friendly, loving, magical gift-giver who loves all the children in the world and brings them gifts on Christmas out of LOVE - not on conditions of good or bad behavior.

As she grows older, I plan on answering her questions with a question. "What do YOU think?" I think will work just fine to allow her to work things out on her own and keep the magic alive in her heart if she still believes (or wants to still believe!) I was 11 or 12 when I finally resolved that my mother was Santa. And I wasn't upset at all. I hope to help my daughter and son live the magic as long as they desire to, just like I play dragons and princesses and pirates and guinnea pigs . . .

My nearly 7 year old dismissed the Tooth Fairy earlier this year himself "after all, fairies aren't real Mummy". Today he said the same for Santa - we thought maybe one more year but he is just too logical. That's what Montessori gave him in 4 years, plus a Montessori teacher mum! Luckily he is fine with not sharing his ideas with friends and cousins!

It's an interesting debate for sure, I don't remember reacting quite so violently to learning that it was a myth when I was a child, and I don't mind the fun of it.... we don't go to such lengths as writing letters from Santa and leaving footprints etc and we don't do the Easter Bunny but I don't think it's that harmful. Parents are rarely completely truthful about everything all of the time and if we were then some things could be harmful to our children, knowing about adult topics when too young to process them fully and put them in context for example. I don't think that it is as clear cut as lying and deceiving our children, parents do it with love.....

Thank you all so much for commenting on this post. I knew it was a controversial topic when I wrote it 2 years ago.....but didn't have the guts to post it until now.

I hope more people comment so that any parents who are wrestling with this topic can read different perspectives and, hopefully, find some ideas to help.