Is there dramatic play in Montessori classrooms? 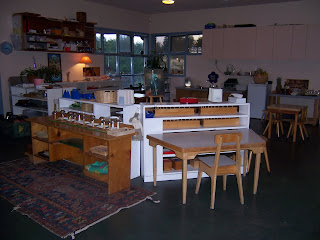 The other day, I was asked (quite belligerently, I might add) by a non-Montessori educator why there is no dramatic play allowed in Montessori classrooms.
"Oh, but there is!"  I countered, " Where on earth did you get the idea there isn't?"

What followed is not worth posting other than to say the woman was more interested in attacking the method than she was gaining any real knowledge about it. However, the conversation got me thinking about dramatic play and what it looks like in a Montessori classroom.

First, lets look at the word play.  It is supposed by many that children in Montessori programs do not play and I can't emphasize strongly enough the error of that supposition.  Put simply, Dr. Montessori described the things that children do as work so that adults would stop trivializing the importance of play.  Play is the work of children and it is how they learn.

Perhaps the misunderstanding comes from the fact that we don't have toys on the shelf.  In fact, that first classroom in San Lorenzo was furnished with toys donated by a group of society ladies.  Gradually, Dr. Montessori brought in some of the materials she'd adapted to be used at the Orthophrenic School.  What she observed was that as the new didactic materials drew in the children, the toys were abandoned.   This can still be observed in many brand new Montessori classrooms; toys are available while the children are introduced to the Montessori materials but are abandoned by the children after a few weeks. 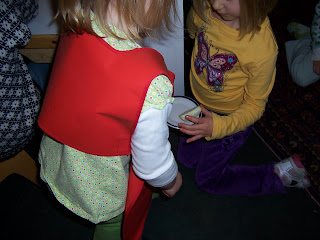 So why does this happen?  Instead of a pretend kitchen filled with plastic food and a pretend stove and refrigerator, we give them real things.  (We call this the Practical Life area.)  Why pretend to prepare food to share with friends when the real things (apples, pickles, jam and crackers, carrots, etc.) are sitting in the real fridge or on the shelf waiting to be prepared?  Why pretend to clean house when there is a whole classroom to be scrubbed, dusted, swept and polished? 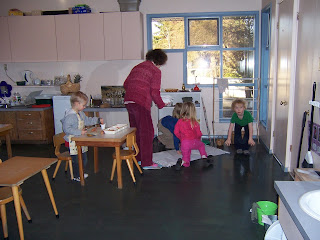 Which leads me to look at the definition of dramatic.  The Oxford dictionary defines dramatic as "Of drama; as of a play-actor, theatrical; fit for theatrical representation…"   - in other words, pretending or mimicking.  Well, I've certainly seen lots of that going on in the classroom.

So, is there dramatic play in our Montessori classroom?  Absolutely, however I will admit that we don't have fireman, policeman, doctor, or purple dinosaur costumes for the children and there are some very 'Montessori' reasons for that.  It is too adult-directed and not real.  I much prefer an assortment of scarves that can be used for anything a child can imagine. (They can also be used at circle to wave while listening to music.)  As for the realism, having a real stethoscope available to the children opens up all sorts of opportunities for dramatic play.  Because the stethoscope is real, they are also learning several science and sensorial lessons.

Dramatic play is very present in Montessori classrooms but, because it does not look like the dramatic play seen in other preschools, it takes careful observation to identify it.

You will note that I've stayed away from a discussion about fantasy and imagination.  That is a topic for another day.

I am teaching in England and w are required by law to have a role play area in the classroom. There is no way out of that. We have been very flexible in what we put in our role play area and it is interesting to see how it is used.

If we put in a traditional roleplay area - a home corner or a shop etc we find there is a run on it. For 2 days we can't prise the children out of it and it is easily the most popular area in the classroom. Then, they have had enough and the area becomes a dead area.

For this reason, we rarely set th area out in the traditional manner. The Early Years Foundation Stage requires us to follow the children's interests. At the moment we have 6 boys who are crazy about all things construction, so the role play area is a construction area. It has an indoor sandpit with spades, buckets, sieves etc and also little diggers, buldozers etc.

There is a table with a shelf next to it with lego, meccano, bricks etc all set out in baskets as in the rest of the classroom.

The play that goes on in that area is definitely dramatic, there is lots of lets pretend type work going on. I think it is constructive.

You go, girl!! And don't forget the dramatic work involved in the language area, starting with verb commands and continuing through sentence analysis and interpretative reading! How many kindergarten classrooms in public schools encourage children to read and act out sentences from great novels???

Sadly, some people prefer to attack rather than learn more. That way, they never have to admit they were wrong. :(

Annicles, so far our licensing body has been satisfied with the amount of dramatic play that goes on in our classrooms. However, if we ever do get mandated to include it I will remember your post. Thank you very much for telling us about the thoughtful way you have included the area in your classroom.

Montessorimatters ,(may I call you Mm?) Yes! The language area is full of dramatic play. So is the Math area - the Banker for the bank game, for example. We could probably post all day with examples. : )

I'm Not Montessori trained, but have been working as a support staff at a private Montessori school this past year and each teacher seems to have a different interpretation of Montessori. I myself believe she revolutionized preschool and has influenced many other programs. As far as Dramatic Play goes, There is things that could be considered dramatic play(work) but I got in trouble today for doing pirates on the playground, and yes it was the children's choice, and the Montessori teachers do the "looking for Dracula" song in their circles, so I feel that some people can be too over the top! They had their whole morning of uninterupted work and I like to have fun on the playground and the children love it! Much respect to Montessori yet I myself wouldnt be so strict as some of the teachers are.

This is an interesting discussion.
I have seen Montessori schools with a play corner incorporating
practical life activities with
imaginary play. I guess I can
see the value of both, being
the creative type. As long as the
main focus is on the EPL and
making things as real as possible
I think there is room to flex a
bit.
K.

This area is where Montessori loses me. My son takes a cylindrical block between two rectangles and announces that it's a hot dog. He often serves me a hot dog with boxier looking blocks that he calls juice boxes. Would he still have that creativity if there were always 'real food' around to play with? I'm not so sure. I love that my son takes a moment to see the world differently and see the potential in every item to be something else. He uses divergent thinking and is never bored because any item can be something else. 1 block can be 100 different things, but only when creativity and imaginative play is encouraged.

Thanks for your comment! I bet he would still have that creativity if there was real food around because he is associating the shapes he sees all around him and making connections. All children love to do this. The same thing is seen in our classrooms when a child picks up one of the pieces from the cylinder blocks and calls it a "baby" or a "man". We don't discourage imagination or creativity. How could we?

Where you may be questioning our method is in our distinction between imagination and fantasy. It is true that we don't encourage fantasy (ideas that have no basis in reality) but we happily encourage imagination and creativity.