Off to Newcastle Island

Last Friday, Diana (the elementary teacher & Principal) and I took the elementary children on the first outing of the year.  This is something that Diana and the children do every year and it is an important bonding experience for them.  Each year, our oldest children leave, children join us from other schools, and a number of younger children move up from the Primary classes.  This means the group dynamics change each year and Diana has found that the trip to Newcastle Island and the elementary sleepover, are vitally important events for the group.

(It should be noted that parents are not invited to join this expedition for very specific reasons.  This trip is about independence and relationship.  Having one's parent along takes independence away from a child and changes her role within the group.)

As Montessori teachers, Diana and I are trained to observe the children, only stepping in when the children need us.  This is crucially important for the bonding the children experienced on this trip.  Sitting quietly on a log, we watched as the children scattered, formed little groups, scattered again, formed different groups, scattered once more and finally all came together in a spontaneous group task.  We did not initiate any games nor did we issue rules and regulations.  All expectations had been discussed in the classroom.

Anyway, enough of that.  Here are some photos of the day.

There was a mix up with the boat we were supposed to catch so we just waited for the small island ferry.  The children didn't mind because there is a great playground nearby the dock. 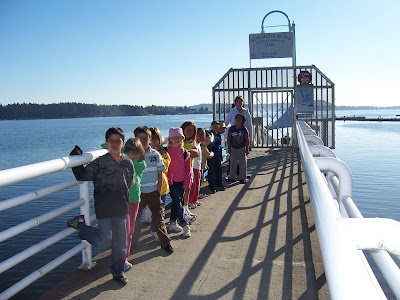 Finally, the little ferry showed up and we were on our way. 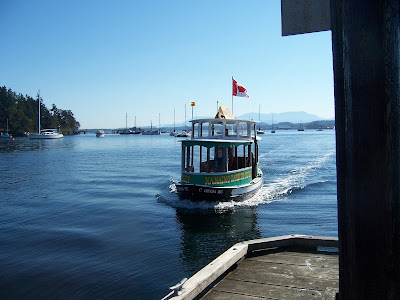 The island has been designated as a Provincial Park.  Considering it is right in the city harbour, it is a great place for picnics, camping, and day hikes.  Once off the ferry, we visited the washroom, filled up water bottles, investigated the buildings and then were on our way.  We walked for about 30 minutes. 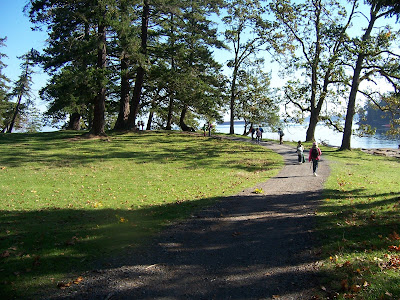 Rather, I should say that we meandered along the path stopping for the occasional photo opp. 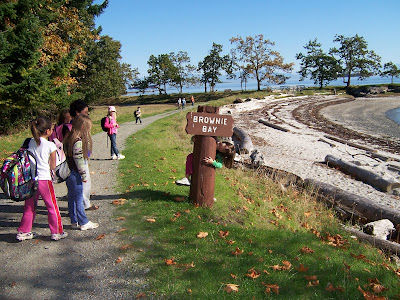 Some of the children needed encouragement and convincing to keep going  because it really wasn't that long a hike. 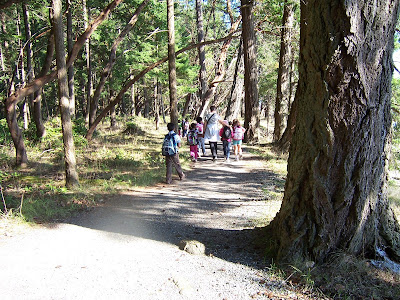 Others needed a little help from Diana to help resolve misunderstandings. 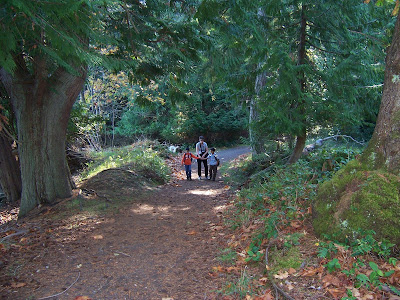 With a chorus of 'Finally!' we reached Kanaka Bay.  The children spread out to eat their lunches but soon abandonded the food to the allure of the beach. 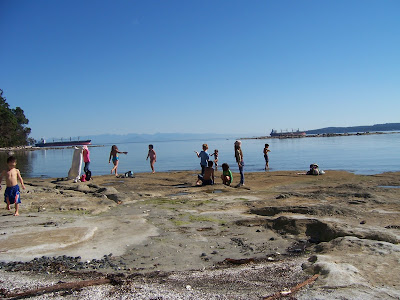 The children broke into small groups to investigate tidal pools, 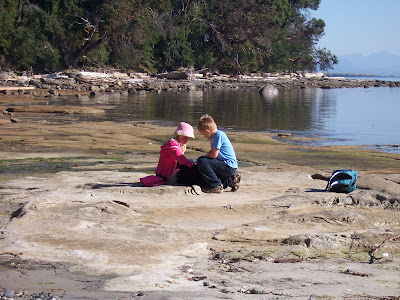 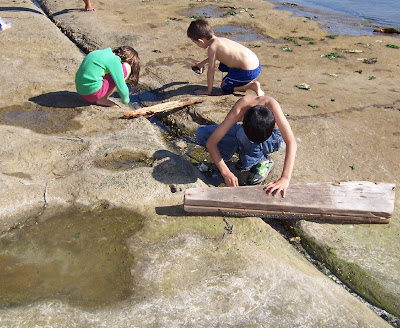 and hunt for sea glass. 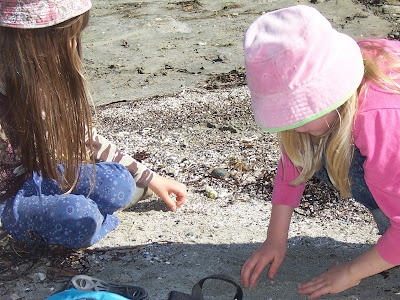 A couple of the boys began to repair an old dock that had been tossed onto the shore during a storm.  The plan, overheard by the teachers, was to get it seaworthy and float it over to Snake Island.  We silently wished them well. 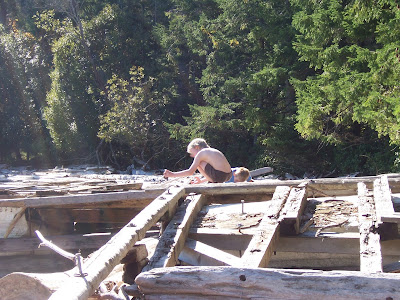 The water was very cold - it is October, after all - but that didn't stop most of the children from going in. There were logs to be moved! Teamwork became natural as various 'tasks' were discovered and attempted.  Like the ebb and flow of the tide, the children formed groups then broke apart to join other groups until..... 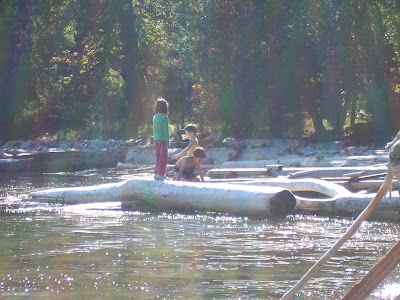 they all joined together in an effort to get that dock, now a Pirate ship, into the water! 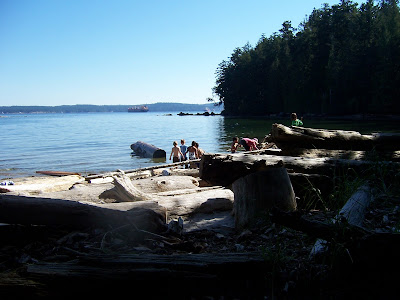 Unfortunately (wink), our time was up before the craft was seaworthy and with promises to come back someday to finish, the children packed up and began the hike/run back to the ferry. 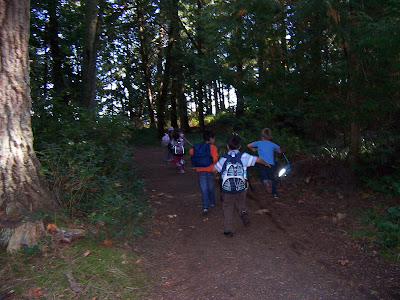 When we stopped for a drink of water, I was reminded that the beauty of this corner of the world never fails to take my breath away. 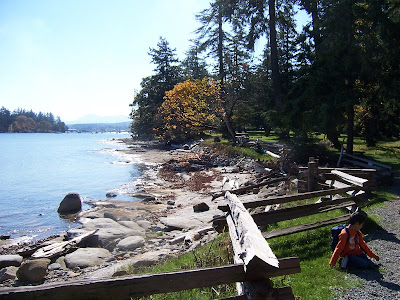 We made it! Tired but happy children piled onto the little ferry...... 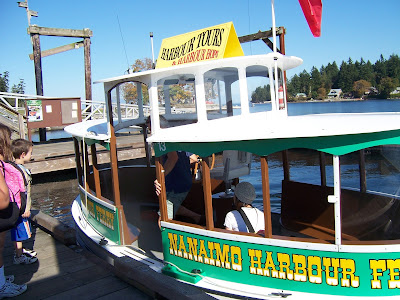 and made their way back across the harbour. 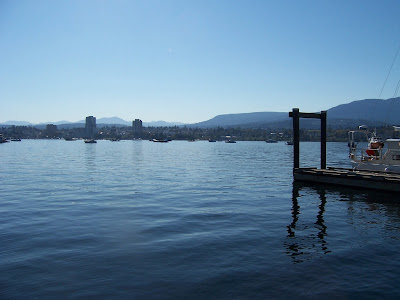 What a wonderful day!
Posted by Cynthia Dyer at 1:26 PM

Labels: Elementary, For Parents, Going OUt

about a girl said...

You were so lucky to get such amazing weather! Newcaslte Island is one of those gifts of nature we are so privileged to have on our doorstep. We were lucky enough to camp on the island this summer.
Did you spot any albino raccoons while you were there?

Thank you, Cynthia, I really enjoyed these pictures. I have never actually made it to Newcastle Island, but I do miss the beautiful west coast beaches. What a wonderful experience for all of you - but too bad there wasn't time to sail the ship, lol.

Albino Racoons? Missed those. Have to keep our eyes open, next year.

Melva, if that raft is still there next year, there is no doubt in my mind that we will be going to Snake Island. Land Ho!!

Great story of a wonderful day, and really nice pictures too. I also appreciated all the subtle suggestions of what made this a Montessori outing. Thanks, Kathleen

Wow!!I had no idea that you did that!! What a wonderful tradition and terrific opportunity to come together to grow and explore! Looks like a great day was had by all! Thanks for sharing.