Children progress at their own rate

According to the writings of Dr. Montessori, learning is a natural, self-directed process which follows certain fundamental laws of nature.  "Only nature, which has established certain laws and determined the needs of the human being in the course of development, can dictate the educational method to be followed;  for this is settled by its aim - to satisfy the needs and the laws of life" (Montessori, 1988, p. 69).  Dr. Montessori discovered that children learned best by doing, not by submissively accepting other people's ideas and pre-existing knowledge.  It was an innovative concept which promoted the active, personal pursuit of many different experiences: physical, social, emotional, and cognitive. 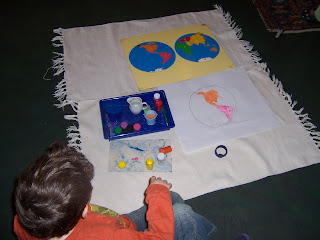 (In the above photo, a student carefully paints a map of the world.  I have chosen to present this work with two paint brushes.  First, a very thin paint brush is used  to paint just the outline of a continent.  Then a wider brush is used to fill in the centre of the continent.  In this way a child who is reluctant to write may hone the fine motor skills required for writing while using the two paintbrushes.)

Dr. Montessori discovered that children progress at their own rate and each child has an individual internal map which directs his or her own capacity and speed of learning. 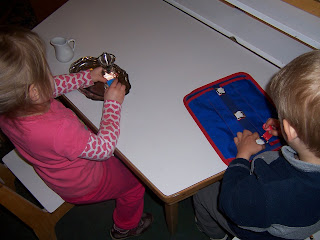 (Here, a couple of three year olds work side by side although each is at a different stage of development. )

With these findings in mind, she carefully designed materials and methods to allow the children to progress at their own rate by spending a personally appropriate amount of time at each stage of development.  In the prepared environment of a Montessori classroom the child is granted freedom and acts on her own free will to move around from area to area.  Provided the child is ready and has had a presentation, she may select those materials which interest her and use them as long as she wishes. 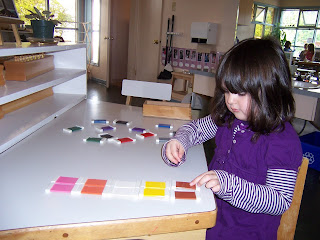 (A young girl works with the second box of the colour tablets.  She matched and "unmatched" them for about 25 minutes.)

Often a child will work with an activity for an extended period of time displaying a deep desire to master and complete the cycle of activity at her own pace.  She is allowed to do so because Dr. Montessori recognized the child is perfecting herself and gaining mastery over her movements.  She believed that a child should be guided by a teacher, but should be allowed to choose for herself which materials to work with and when.  This discourages competition because curiosity leads the child to her work. 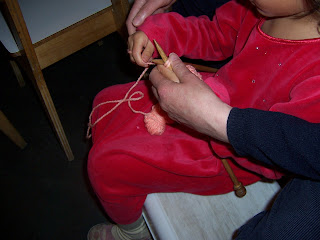 (One of the five year olds learns how to knit with the guidance of a teacher.)

In a Montessori classroom, children are encouraged to perform the activities, but they are not forced.  This way they learn at their own rate and also - remarkably - faster.